"There must be dales in Paradise
Which you and I will find.."

Bilsdale Mast, at 1030' so long a feature of our North Yorkshire walks, was brought down by a controlled explosion on Wednesday 6th October 2021, after it was damaged by fire.

For those who haven't seen it, here's the official Arqiva video of the event.

If you are viewing this on a phone and the video doesn't show then click "View Web Version" at the bottom of your page.

Posted by Forlorn Hope at 14:29 No comments:

We drove to Ampleforth via the A19 and Thirsk Bank and parked in the village where there is plenty of roadside parking.


Tom Scott Burns says that Ampleforth is mentioned in the Domesday Book and means 'ford where the sorrel grows.'
As we walked uphill out of the village we saw a memorial bench with an interesting plaque to an 'Old Timer'.  We would like to know more about Ron Tyreman but an internet search for the man and song has proved negative. 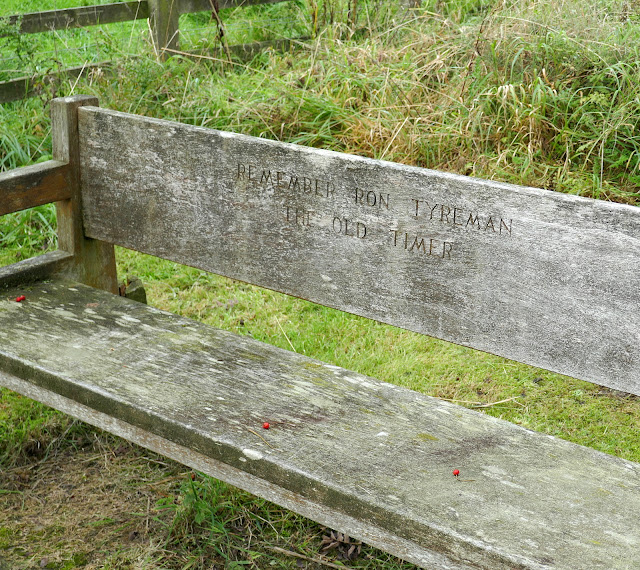 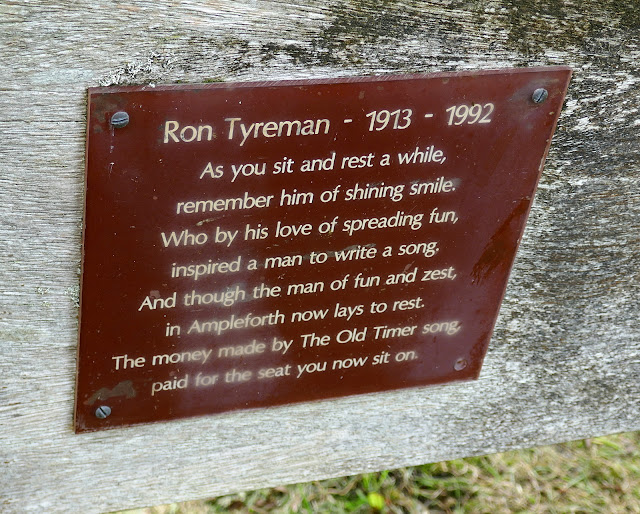 We followed the road west out of the village and took the second turning on the right, into Westwood Lane.  Passing a working sawmill the road soon becomes a narrow lane which is very pretty and pleasant to walk along, as we enter Shallow Dale.
This is a very quiet dale and there is little trace of the Quaker settlement that was once scattered along the valley, growing flax in terraces and spinning it into yarn. There are heaps of stone where their cottages once stood.


A long gentle climb brought us to the head of the valley where the path continues past High Woods Farm and then returns alongside Low Wood plantation before entering Burtis Wood.  We walked through the wood for some time, descending, sometimes steeply, back towards towards Carr Lane. 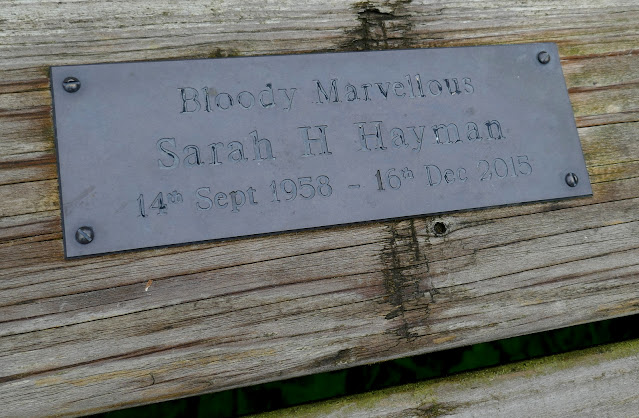 After leaving the wood at a stile we turned sharp left and, after standing to watch a family of buzzards for a while, we walked through three fields, keeping parallel to the road below. 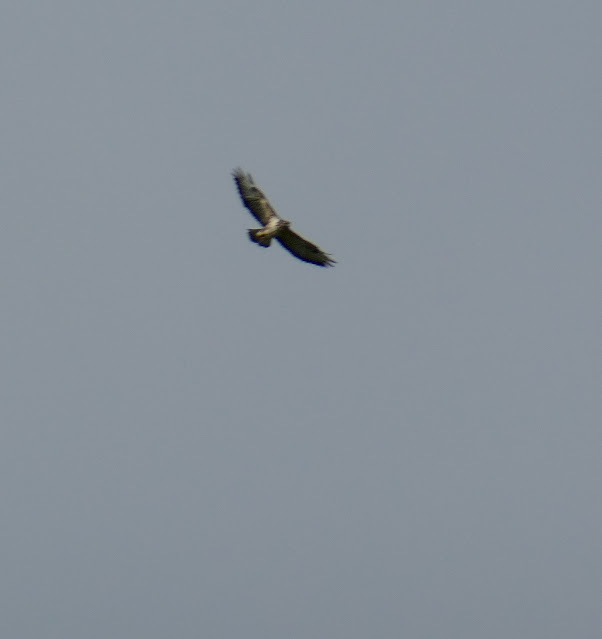 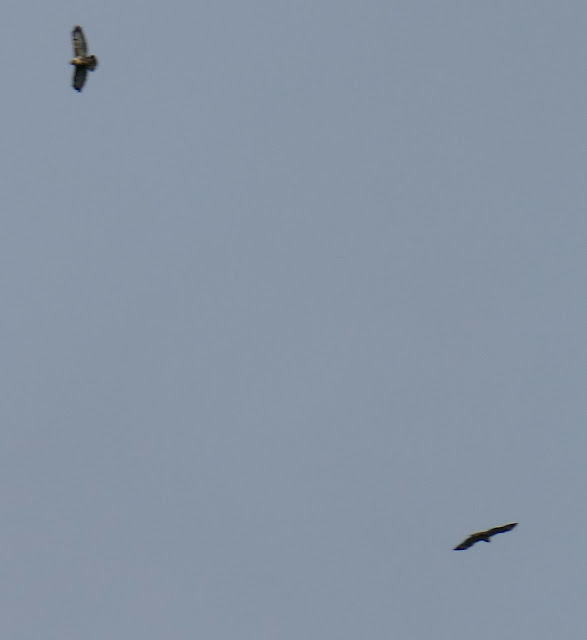 As we reached a stile into the third field we paused and watched a wasp battling a spider on the stile.  We left them to it wondering who would win? 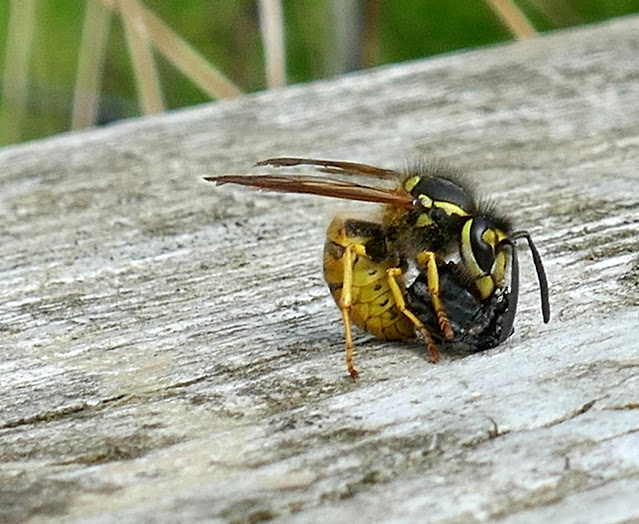 As we crossed the third field we passed by some brambles where we saw several comma butterflies.  A butterfly we never saw in my youth, they have become common over the last 40 years, apparently because they thrive in the warmer climate. 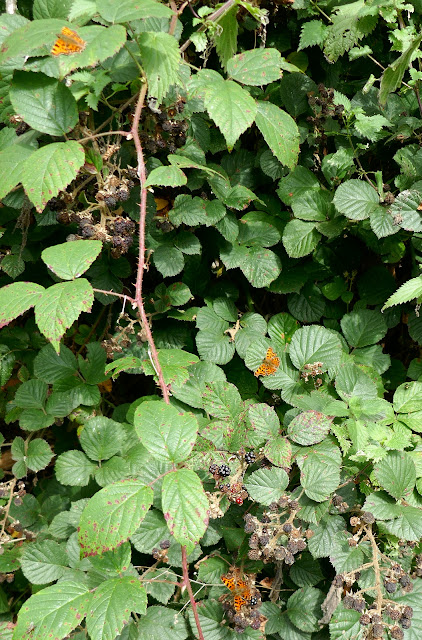 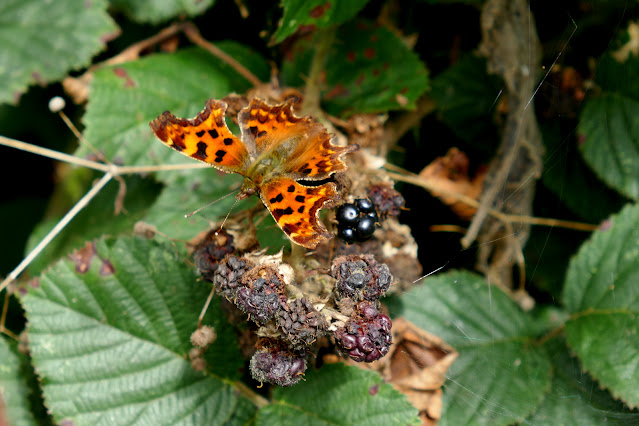 We rejoined the road at the end of the third field. We were now leaving Shallow Dale and after crossing Carr Lane we began today's second circular walk, this time southwards of Ampleforth.
We crossed the road and entered a field where we came to a sudden halt.  Two beligerent heifers emerged from some bushes and would not give way to us, despite our best shouting and waving.  When the more feisty white cow started towards us we decided discretion was the best part of valour and made a detour of their field.
The next field contained a herd of cattle who were totally disinterested and we walked through unmolested.

We followed a way-marked path across fields to reach Newstead pond, which TSB describes as delightful but now, overgrown with weeds and algae, no longer deserves that moniker.  Here we turned sharp left and walked back up to the field boundary where we found a sheltered spot to sit and enjoy our coffee and scones.

After a pleasant break we set off once more crossing a couple of fields and joining a lane which took us past Old Pilfit Farm.

We passed the old railway track and property that once served Ampleforth until 1950.
The lane reaches Low Lion Lodge and bears left, but we leave it by keeping straight on past the lodge before entering fields to walk south to reach the much grander High Lion Lodge.

Passing by Upper Lion House and its menagerie of pet livestock we turned right into North Moor Lane and after a couple of hundred yards, turned left onto a forestry road to cross Yearsley Moor.

Eventually we reached Higher Fish Ponds where we swung left to sweep past the ponds to reach Lower Fish Pond.  This Lower Fish Pond is far larger and is a tranquil and pretty spot. 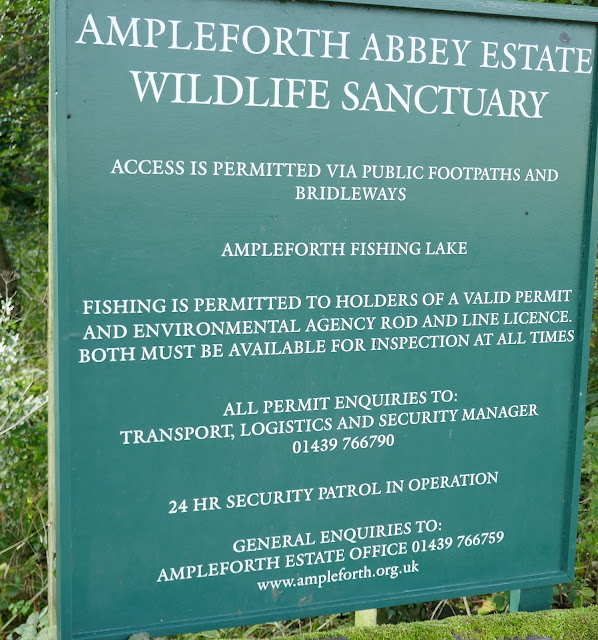 Just past Lower Fish Pond the route turns north to cross a sheep field.  There are new gates on the field and no way marks on this side of the field but a stile and way marks at the far side.
We crossed the old embankment of the long disused Malton to Coxwold railway.  TSB explains that a special train (shades of Harry Potter) used to convey students from London to Ampleforth College at the start of each term until the line was closed in 1964. 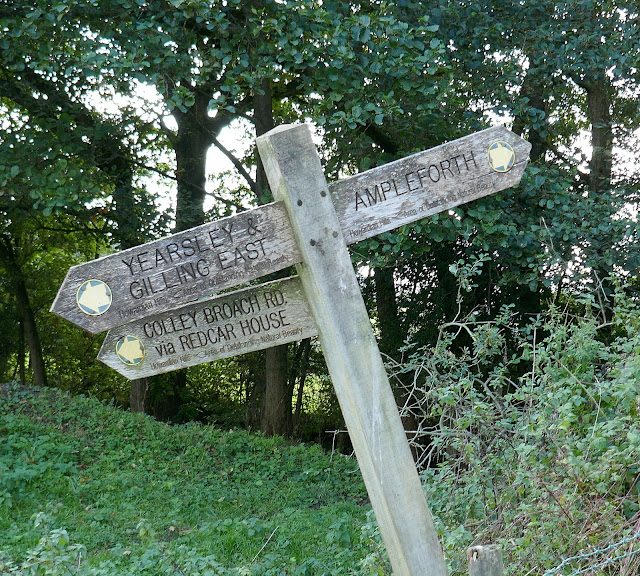 There was a fine view of Ampleforth Abbey and College to our right as we joined and then followed Mill Lane back to Ampleforth.

Although without many interesting features this is a pretty route along little walked paths and best done with a close eye to the map.
No pubs were open in Ampleforth on our return but a short drive to Coxwold found us sitting outside the Fauconberg Arms for our debrief while enjoying the autumn sunshine.
Posted by Forlorn Hope at 16:04 No comments:

Why Tom Scott Burns? Click on photo to read more 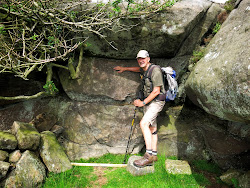 Both written by Tom Scott Burns and out of print but easily obtained online.

Arcanum - North Yorkshire's mysterious past
Out and About.....

All information on this site is given in good faith and no liability is accepted in respect of any damage, loss or injury which might result from acting on it.

Any comments or queries?
Email me!